GROWING up in Port Macquarie and being fortunate enough to live close to the water, I’ve spent countless hours exploring and fishing the Hastings River. As a kid, just about all of my free time was spent fishing in the Hastings, and over the years I think I’ve put a lure in just about every square metre of it!

I’ve experienced some great fishing in the area, but with the Manning River an hour to the south and the Macleay River an hour to the north, Port Macquarie is often overlooked as a fishing destination. However, unlike the two aforementioned rivers, (and nearly every other northern NSW river), the Hastings is completely closed to commercial fishing and it seems as though the river is becoming healthier by the day.

Compared to many other northern NSW rivers the Hastings River is a fairly short, narrow and shallow system measuring 128 km long with an average depth of 1.9 m. The Hastings rises in the Great Dividing Range south west of Kemps Pinnacle in the area surrounding Oxley Wild Rivers National Park and Werrikimbe National Park. It flows generally south east and is joined by seven tributaries including the Tobins, Forbes, Ellenborough, Pappinbarra and Thone rivers, before reaching its mouth at the township of Port Macquarie.

All of the typical “bread and butter” species are abundant in the Hastings River with excellent numbers of luderick, bream, flathead and whiting. During the warmer months the canals and parts of the lower reaches can also hold big eye and juvenile giant trevally, Moses perch and the occasional large mangrove jack. School mulloway are also pretty common year round with good numbers in the system over the Christmas holidays, but interestingly, this hasn’t always been the case. School mulloway were once pretty hard to find in the river and it seems as though the exclusion of commercial netting in the year 2000 has really allowed mulloway to flourish ever since. The Hastings River also hosts a healthy, albeit small population of Australian bass and a 20 minute drive up river from Port Macquarie will see you fishing in some likely looking bass country. 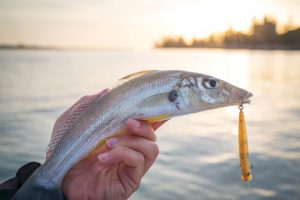 Reading the Hastings can be pretty tricky for many visiting anglers that are accustomed to fishing busier, highly developed waterways with plenty of man-made structure. Aside from the sprinkling of oyster racks and pontoons, rockwalls and jetties in the lower reaches, the rest of the river is relatively devoid of man-made structure. Visiting anglers will also notice the river is quite shallow, with the water at times being crystal clear across the high tide. As a result, fishing the lower reaches can be tough through the middle of the day and quite often you’ll need to concentrate your effort in the morning and/or evening.

Starting at the mouth of the Hastings, the two breakwalls known locally as North Wall and South Wall are great places to fish baits for bream or chase luderick with a float and green weed. The two walls also produce some trophy mulloway around the new and full moon tide phases and also during a “fresh” – the first few pushes of fresh floodwater pushing out into the sea.

There are also some trophy flathead lined up along the Coal Wharf on the North Shore in spawning aggregations, but they are usually pretty hard to catch due to heavy current and plenty of more willing smaller flathead lying around them.

Over the high tide, the flats around Pelican Island and the shallow “back-channel” that runs behind it – connecting Settlement Point to the marina – offers prime shallow water whiting and bream territory. Over the warmer months, the fish in these areas will take small surface lures with gusto, but using nippers with very little weight or unweighted is hard to beat. Casting unweighted nippers around scattered weedbeds in the shallows is also a deadly effective method to catch luderick here.

Moving across the river just upstream from Settlement Point, Limeburners Creek spills into the Hastings. The mouth of Limeburners is littered with oyster farms and is the most structure-rich area of the the entire river. The sandy flats and deeper channels here hold good numbers of flathead and are terrific places to target them on soft plastics and vibes. Big blue nose bream also patrol the oyster racks and pontoons and respond well to lightly-weighted plastics, crankbaits and surface lures.

Heading further upstream, the outside bends of the river that run along Hibbard and Riverside are exposed to decent tidal flow with the water being around 5-6 m only a few metres off the bank. These two bends are also lined with houses, jetties and moored boats which create swirling back eddies and offer predators perfect ambush structure. Drifting along these frontages working 80-100 mm plastics with a ⅜ – ½ oz jig head can produce some large flathead and school jew. I’ve had some great sessions here boating half a dozen schoolies in one drift.

Man-made structure just about finishes up stream from Riverside, with the Maria River arm forking north west and the Hastings continuing west south west to Wauchope. The lower reaches of the Maria River hold good numbers of flathead and bream with some bigger fish occupying the deeper holes around the area called The Hatch. The Dennis Bridge and the newly finished Hastings River bridge along with a few smaller bridges cross the river between Riverside and Wauchope. The bigger bridge pylons in deeper water are jewie hotspots and working plastics and soft vibes or soaking live baits around the herring schools here can be the undoing of some nice fish.

The water is brackish around Wauchope and the Hastings River quickly becomes fresh upstream from Beechwood. This is where I begin to focus on bass from September to April. 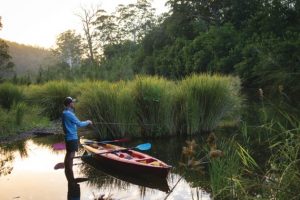 Some stretches up river are best accessed
with a kayak.

As alluded to earlier, the Hastings River pales in comparison to the length and catchment areas of the Macleay and Manning rivers, but it punches well above its weight for bass. After some great seasons on the Hastings, I’ve found no need to travel much further than half an hour west of Port’s city centre.

The Hastings River has quite a few short productive tributaries upstream west of Wauchope with just about all of them holding bass. I like to start the season by fishing low in the main river where high tides impound downstream flowing freshwater. I typically focus my effort between Beechwood and Pipeclay early in the season before venturing further upstream, depending on water levels. The catchment area of the Hastings is relatively narrow and steep, and 20 mm of rainfall over a short period of time can raise the water level quite quickly. The water can also become muddy for a short while after meaningful rain. During dry periods the freshwater streams of the Hastings are generally gin clear, and the bass can shut down quickly after sunrise until late afternoon.

Freshwater herring are thick in the Hastings and are really active at dawn and dusk. With the right conditions I find using larger 70-90 mm walk-the-dog surface lures pre-sunrise to about 7 am the most productive and exciting method for Hastings River bass. After sun up, spinnerbaits and plastics fished around the steeper banks will produce results.

Tributaries like Pappinbara and Thone are great places to cast cicada imitation surface lures, prop baits and beetle spins or jig spins armed with lightly weighted 40-60 mm plastics. You’ll catch plenty of smaller bass in these tributaries with the occasional 40 cm fish, and when conditions are right, you’ll hook fish on surface lures right on through the heat of the day. You’ll need a kayak to fish both of these tributaries effectively.

Another tributary I like to fish is Pipers Creek which runs behind Kundabung, a small town off the Pacific Highway about half an hour north of Port Macquarie. Pipers Creek flows into the Maria River and is fairly deep and quite narrow, it’s also full of fallen timber and has almost vertical coffee rock banks. There is a small boat ramp at Kundabung and Pipers Creek is big enough to fish in a boat. However, I would advise exploring the area in daylight hours first and also travelling upstream slowly. Like most tributaries of the Hastings, a kayak is the best option to effectively fish Pipers. 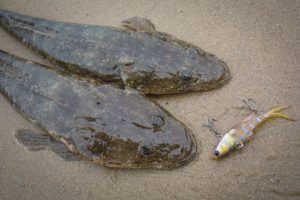 Soft vibes are a great imitation of glass perchlet
and herring, which rae staple prey in the Hastings.

It’s always a good idea to carry a few different options when visiting any destination and to get the most out of the Hastings River a 4-8 lb light tackle threadline outfit and a slightly heavier 6-10 lb outfit will cover most situations. A longer 20lb threadline outfit may be a good option to have if you plan on fishing baits and lures along the breakwall for mulloway. Keep leaders light and long, I find 3-6 lb flurocarbon leader essential for whiting and bream in the clear water and 10-16lb flurocarbon leader for flathead, jewies and bass in the river.

The main forms of prey in the Hastings are whitebait, glass perchlet, herring, prawns and glass shrimp. Natural and flashy lure colours work well throughout the Hastings with 50-100 mm plastics and soft vibes the most versatile lures. Small clear surface lures like the Cultiva Zip’n Ziggy, Bassday Sugarpen and Luckycraft Gunfish will all work well for whiting, bream, and flathead in the shallows and bass in the fresh.